In the late 80's, when I was no longer working with PDP-11 computers but with IBM hosts and networks, I got the chance to get a Plessey PDP-11. It was a small cabinet with everything but without documentation. Unfortunately I did not know too much about how to preserve a PDP-11 and instead of keeping everything together I started to take it apart and disposed of things that apparently did no longer work or which I had no possibility to get the necessary parts to repair it. Further adding to the dilemma was the limited space in my flat and intermittent changes in hobbies so that at the end the only thing I kept was the backplane and the cards. 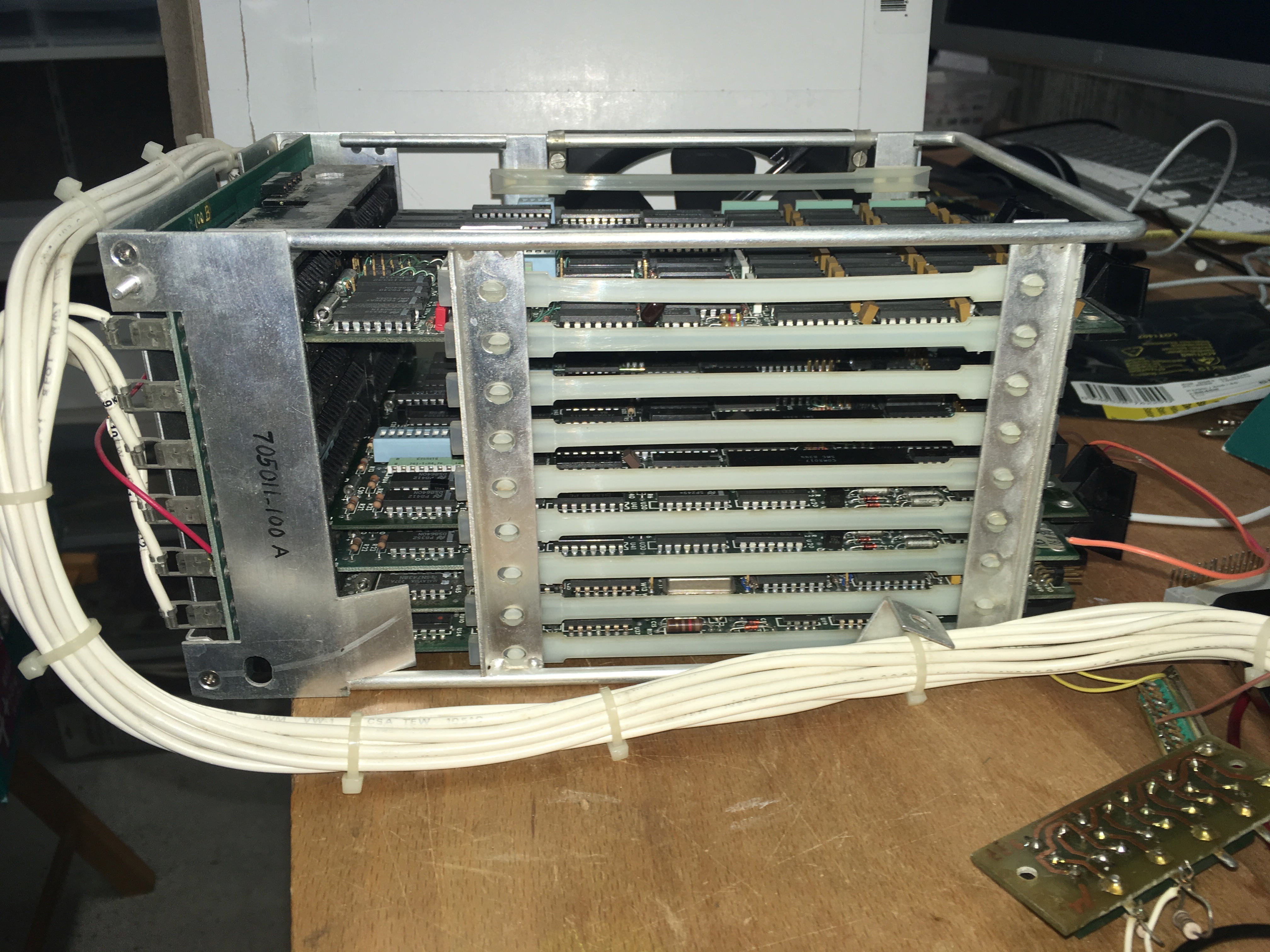 The system consisted of a Plessey backplane with 9 dual-width slots and a DEC M8186 CPU board and a lot of Plessey Peripherals cards. These cards were emulating standard DEC cards. Little did I know about the system and it actually worked only by chance as long as I did not change the amount and order of the installed cards. The original system consisted of the maximum of 9 cards. But more about this later.

There was no documentation, unfortunately the department owning the system has already thrown away everything when they were dismantling the system. There have been specific days for the disposal of different materials and when I learned about the system the date for paper disposal was over and so the only thing I could rescue was the cabinet. Later I got in contact with an engineer of my previous employer who had same very sparse documentation about Plessey Peripherls systems and was kind enough to FAX them (at that time an international fax of about 20 pages was rather expensive) and up to now this is the only documentation I have. These pages only describe the power consumption and the jumper settings. Not much but enough to reanimate the system. I have scanned the pages and have added them to this post. You will find a download link in each appropriate chapter.

The only original DEC part of the system is an enhanced PDP-11/23 CPU board with FPU and MMU. In other word it supports 22-bit addressing. This is also the only board I owned the handbook and for which nowadays you find plenty of information in the internet.

The Console Card, aka Multifunction Card

This was the most mysterious card but apparently necessary. Today I know a lot more of it as I took my time to reverse engineer the schematic. It includes the following features 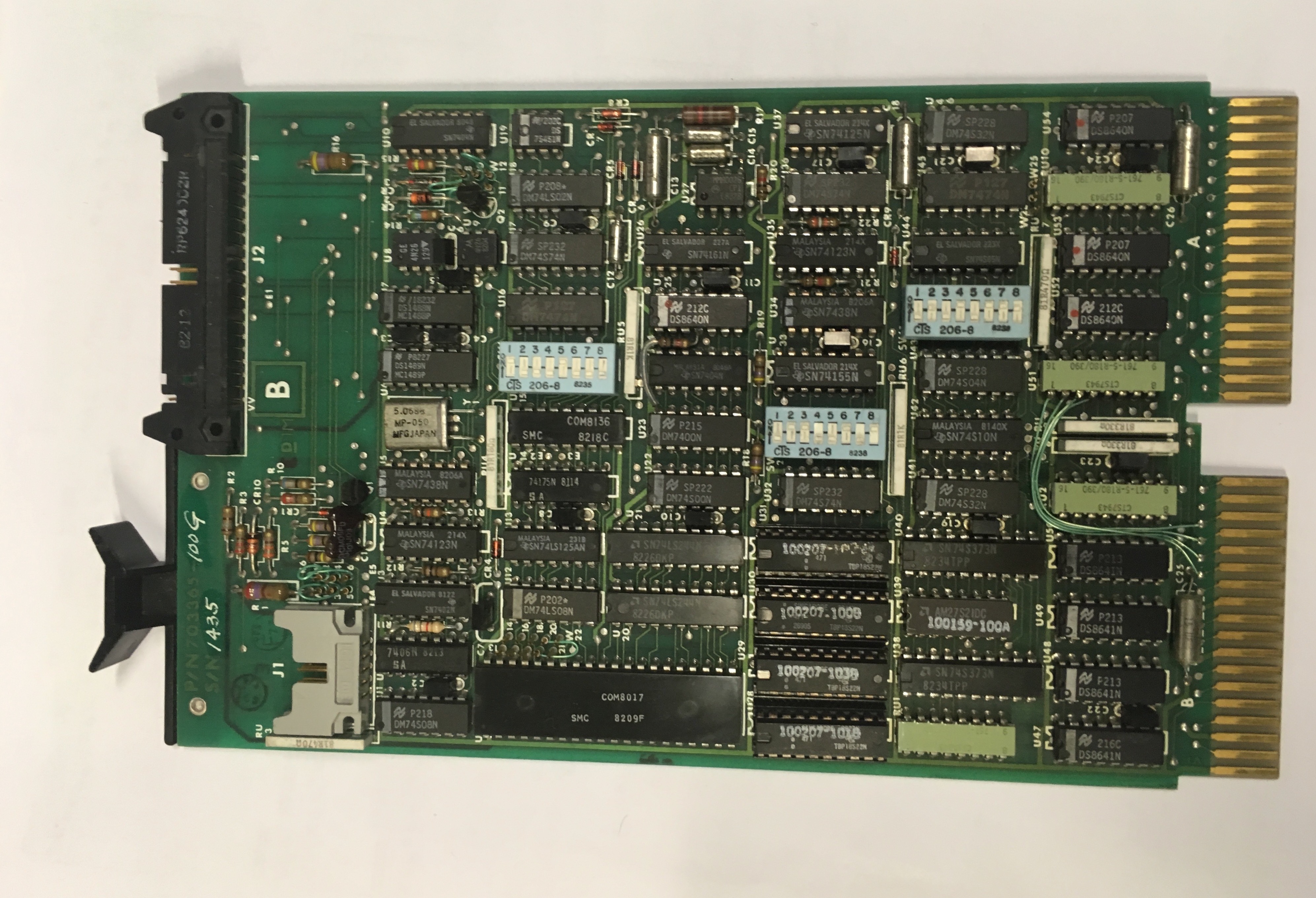 Here you can find the scannned pages I have about the Plessey Multifunciton Board .

Originally the PCB of this board only had bus termination for 18 address bits. My sample includes an ECO (Engineering Change Order) that connects the additional 4 address bits required for 22-bit addressing to spare PINs of the dual terminator resistor networks on the card.

The system was equipped with two SV-128 memory boards, each having 128kw of Memory, so the system had a total of 512kbyte RAM. Pretty good to start with and even enough to boot RSX-11MPlus. Unfortunately one of those two boards failed shortly after reanimating the system. The main reason for my PDP-11 Q-Bus Memory project. So now the system as 2Mbyte of RAM. 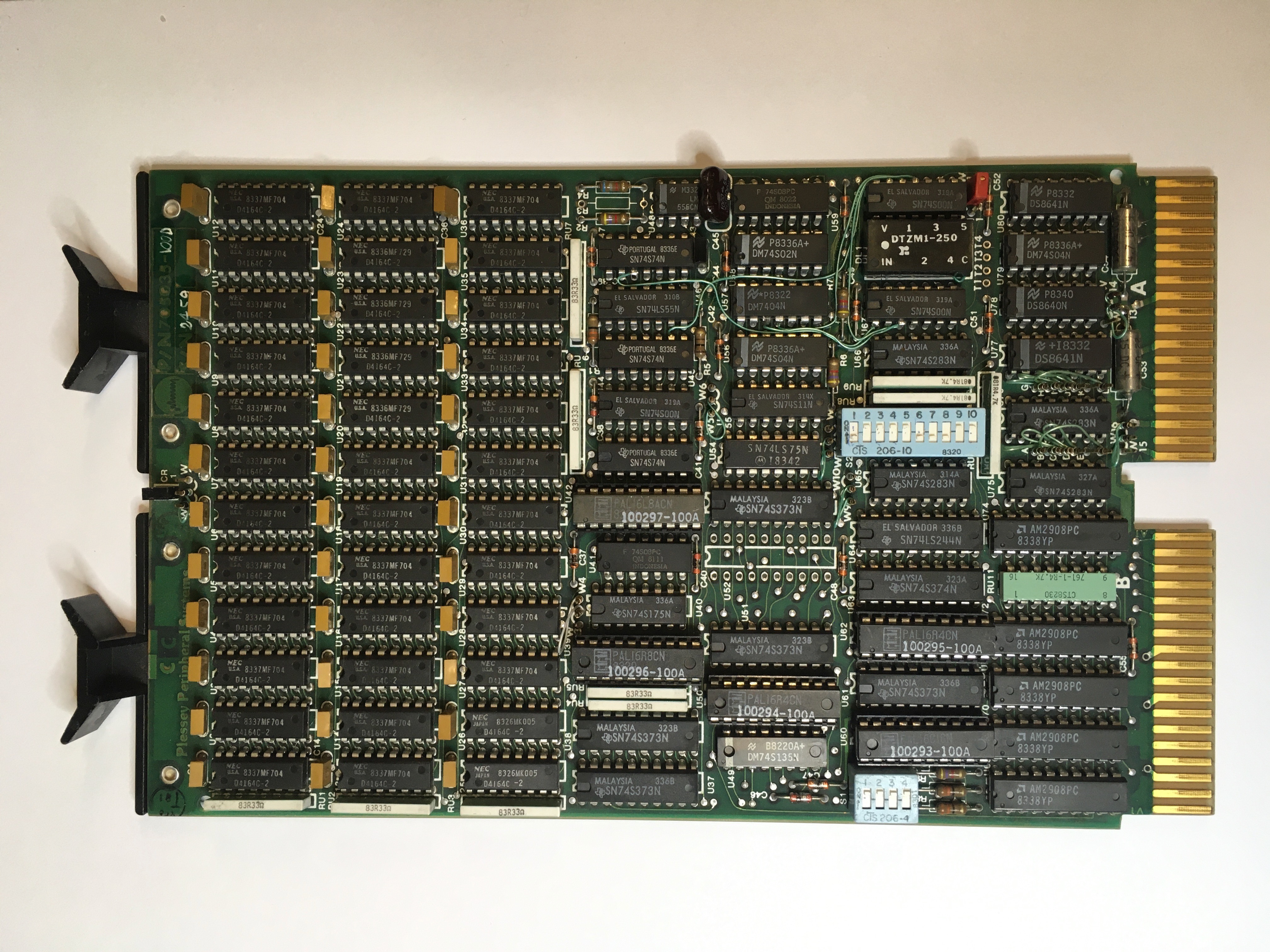 The following scanned pages shows the jumper and DIP switch settings of the Plessey 128kW Memory .

This is a board that emulates a RXV02 but connects to standard Shugart SA800 drives with a standard Shugart Floppy bus. Not yet tested as I don't have an 8” floppy drives, but I have a PC HD floppy which except for the connector works the same as an 8” floppy drive and one of my plans is to make an adapter cable and test it. Apparently there was software for it so you could format your floppies but this software is no longer available. So I need to format the floppies with another computer, but that's another project running

This is a disk controller that emulates an RLV12 with either 2 or 4 logical units and interfaces to a SASI disk. The original system had a XEBEC 1410 Winchester Disk controller attached to a 20Mbyte Hard disk. the XEBEC 1410 no longer exists but apparently the newest version of the SD2SCSI firmware should support the SASI interface, I still have my hope to test it once I find enough time. In the meantime I have built my own “RLV12” for the Q-Bus.

As the name indicates this is a clone of the DEC DLV11J M8043, the system also came equipped with two of these cards. The serial interfaces were used to connect to the logistics interfaces and logistics terminals. The system was originally used as a goods verification and registration system of a chemical production plant. So it required a lot of serial interfaces. 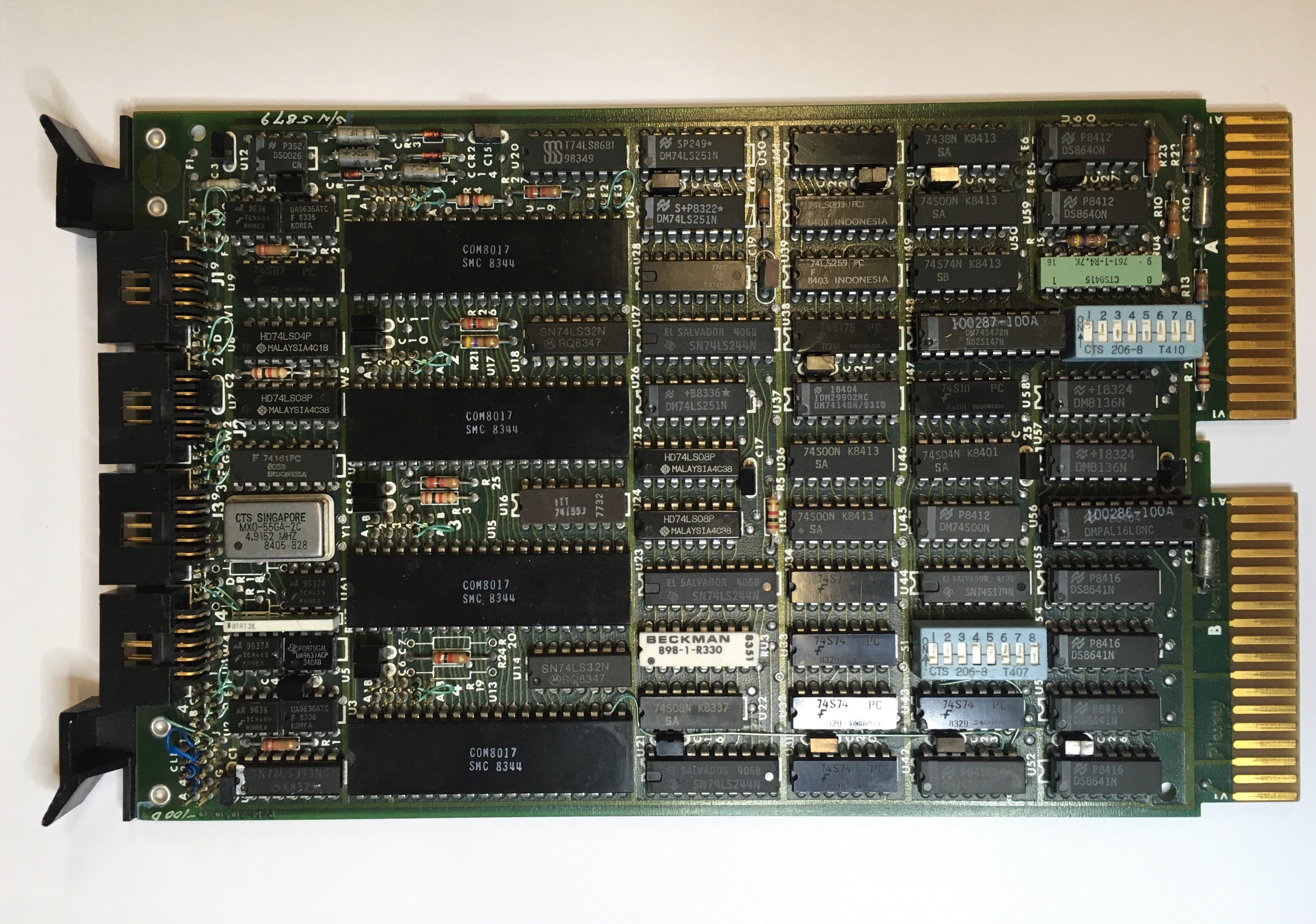 In the document linked here you can find information about the DIP switches and the wire-wrap connections of the Plessey DLV11J .

This is the most mysterious interface card and I have absolutely no information about it, but most probably this is also the card with the least interest.

Another mystery was the backplane and card cage that came with the system. It is a nine slot dual width backplane without bus terminators. It supports 22-bit addressing. There are 4 jumpers that I assume are there to configure the backplane for 18-bit addressing. The system came with 512kbyte which implies that the system was using 22-bit addressing. I do not know for sure what these jumpers are for. They connect to the bus signals BDAL18 to BDAL21, that's all I know. I have left them as they were. However the layout of the backplane itself is still unique. It requires that a CPU with bus termination is installed in slot 1 and that the Multifunction card is installed in slot 9. Normally in a Q-Bus backplane you must not leave any empty slots between the CPU and the last board, else you need to install signal continuity cards to connect all boards to the interrupt acknowledge and bus grant daisy chain signals. But this particular backplane is wired in a ways so slot 9 is actually directly chained to the interrupt acknowledge signal of the CPU board and then the daisy chain of this slot are brought back to slot 2. In fact a very clever setup as it allows you to leave the console in slot 9 regardless of the configuration. And as both the CPU and the multifunction board inlcude termination the bus was always properly terminated on both ends. For a very long time I did not understand this and because I kept all cards adjacent without a gap. Only by chance I started to populate the system with the CPU in Slot 2 because the air-flow of the fan in Slot 1 was not sufficient to cool down the CPU board .

A second oddity is that the clock input is feed via a dedicated power supply wire to the bus signal named SSPARE2 on slot 9. Another reason why you have to install the Multifunction board in slot 9 as this signal is not bussed. The Multifunction board is provided with input protection on this signal and translates it to the standard Q-Bus levels (provided the LTC register is programmed accordingly)